Almost half of all students in Primary school are failing to achieve adequate levels of understanding and ability in Maths, English and Science, according to 2015 analysis from the think-tank CentreForum and research body Education Datalab. The results have left parents outraged, teachers stumped and children, well, 43% less intelligent.*

Lots of suggestions have been put forward as to how get kids learning more, but in such a digital age, where it’s much more interesting to play games and google everything, finding a solution isn’t as easy as you’d hope.

So what if gaming and digital media could be used, to make learning cool again? One system is doing just that. Virtual Reality, a 3D generator of environments in 360 degree visuals, is preparing to become the newest education tool that puts the days of textbooks and pencil and paper to bed.

It is no surprise then that Google have taken the VR-education challenge on, not only building software that both informs and engages, but also creating Google Cardboards, an affordable VR viewer that can be accessed by everyone. Google Cardboards have been adopted by Expedition, a software which gives students an insight into other countries and realities, showing 150 different environments from 14th Century Verona, Italy, to the Great Wall of China. The project takes life and geography education out of the classroom and into never seen before worlds. How do we know it’s improving education engagement? The excitement of the school kids trying it out says it all.

Another education VR platform set to take the world by storm is an experimental app called Artificial Intelligence (Al). It creates avatars and processes language in a way similar to social media platforms like Facebook, to test users with questions which involve search activities to answer. The game also gives direct feedback and allows teachers to track students progress so if they are struggling, they can be given the additional support necessary, instead of hiding at the back of the class.


“We seek to open up students’ thinking by posing
questions that provoke them to stop and think.
A framework of questions and student responses
links together into a conversation and
the intelligence is tuned to select the most
appropriate next question.” 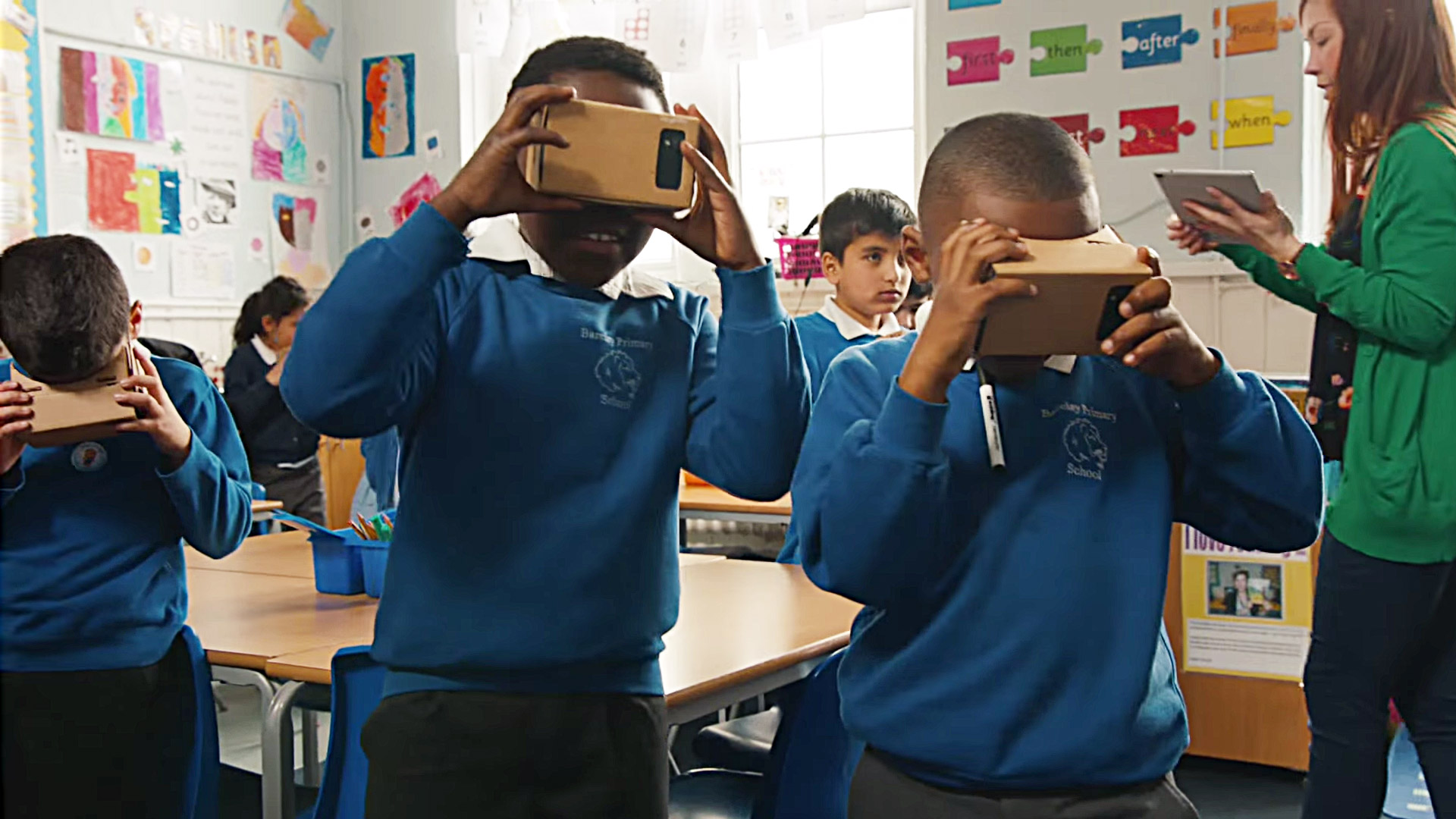 Testing children by asking them to use their initiative, and working with their interests outside the classroom, to make the learning feel less like work, has so far been very successful.


VR can be used to educate more than just the basic school subjects. What sets it apart from other technologies is its ability to directly take you out of your own world, and place you into someone else’s point of view. This has proved a very useful tool for conveying certain messages and changing opinions.

Global alcohol beverage company Diageo have started building a platform to demonstrate how poor drinking decisions can have detrimental consequences. Using information collected from interviews with people actually affected by drink driving, it places a user into the passenger seat of a car with a drunk driver. Highlighting the severity of the consequences intends to discourage young people, some of the most vulnerable new drivers on the roads, from drink-driving or wrongly assuming getting a lift with a drunk driver will “probably be fine”. It is certainly a step-up from the “drink responsibly” labels on the bottles you usually see. Not to mention it is certain that no textbook could successfully convey the horrors of being in a car crash as well as a direct-feeling experience can.

Educating people with moral messages and the importance of making the right decisions is being used on more than just the younger generations. Military medics are using VR to recreate the experience of carrying out a resuscitation aboard a helicopter. Replicated as closely as possible, it uses sounds like background gunfire and movement motion from heavy turbulence to bumpy landings.

What is so exceptional about this use case is the opportunity it gives for more accurate training exercises. With technology changing so quickly, the helicopters used in the military change regularly. If you are looking for accurate scenario replication in training this means new wooden models of the helicopters have to be made to keep up, an expensive and time consuming task. VR can just reprogramme the system as and when necessary, a low-cost tool for quick adaptation.

Having seen some examples of how Virtual Reality is already being used to educate the man and the masses it can’t be argued that the technology is at the forefront of digital innovation and could be a serious game changer for life in and out of work. Perhaps all businesses need to be adopting the technology sooner than expected, to stay ahead of the new generation, growing up with VR in the palm of their hand.

To learn more, keep yourself updated with our weekly feature articles on VR!
*https://www.theguardian.com/education/2016/jan/17/school-students-england-failing-to-make-grade-report