Without a doubt, everyone’s favourite activity during the winter months is reminiscing about the summer holidays. While pressed up against radiators wearing multiple jumpers indoors, feet invisible underneath a barrage of hot water bottles, we British love nothing more than talking about our trips abroad to make the bad weather just a little more bearable.

Holidays are the British’s pride and joy. Hours are spent scrolling through countless holiday destinations and summer trip packages looking for the perfect week or two away. Whether you prefer all-inclusive 5 star hotels, sipping cocktails on white sandy beaches or trekking deep into the Amazon jungle, holidays are a big deal.

So what if there was a technology that made searching for and guaranteeing the perfect summer holiday destination easier? Well there is, and it is about to take the travel industry by storm. Let’s talk Virtual Reality.

The 360 degree visual video platform which boasts unbelievably realistic graphics and accurate scenario replication offers the experience of a lifetime. Being fully immersive and often interactive, Virtual Reality (VR) systems are the closest we have got to time travel without a Tardis parking itself at our front door. Because the software can show any number of visual scenes, you can be immersed in any location around the world, without having to get up off the sofa.

In 2009 when VR was a relatively new system, three undergraduates studying computer science at Brandeis University had an ingenious idea that lead them to start up one of the first VR websites. As high school seniors they found researching colleges boring and felt without visiting the colleges (which could be located all over America or even further afield depending on the applicant’s preferences) their applications were rather a stab in the dark. They felt unsure that they would actually like the college and the surrounding area. These three undergraduates realised that a tool like VR could be used to let prospective students experience the locations inside and out of the college from anywhere they wanted. 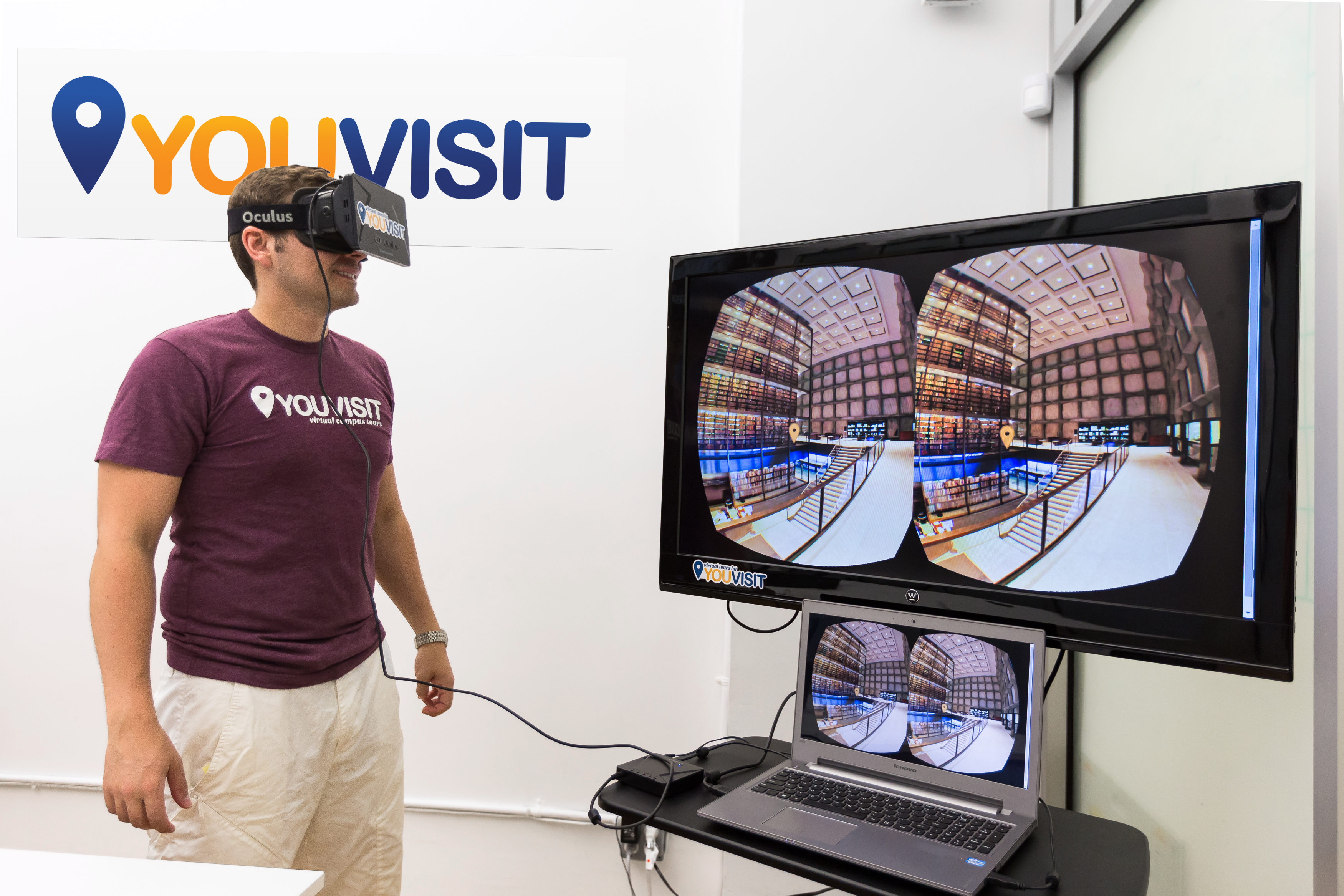 Their end result was YouVisit, a website with free online access to numerous locations in VR with a google cardboard (or similar headset) or as a 360 degree video. The platform has been so successful that to date it has built more than 1,000 Virtual Reality experiences expanding its offerings from college campuses to helicopter views across New York City and tours of the Louvre museum in Paris.

The North Face clothing line who specialise in performance apparel, equipment, and footwear, are using the full potential of travel industry VR to advertise their services. Creating a video specifically for Facebook’s Oculus Rift, it shows users the experience mountain climbers have jumping off a cliff and then opening up their parachutes as they glide over Utah. With sales that rely on the strength of their clothing, and it’s suitability for a multitude of outdoor activities, there is no better way to showcase their strengths than by showing users the extreme sports that can be done in their designs.
Shangri-La hotels are one of many hotel chains, to have taken on VR to give customers a 360 degree view of their hotel. To give potential visitors a real feel for the size, space and aesthetics inside the hotel, an interactive video showing every possible angle is provided with VR.

For this company, like so many others, using VR is an easy manageable and potentially hugely successful advertisement and investment. Conference and meeting rooms can be presented in 360 to situate any potential client in the middle of the room, so they can get an accurate feel for spacing particulars that you cannot emulate in a photo or linear video.

The potential doesn’t just stop there. Car rental companies could demonstrate types of vehicles they have available for you to hire abroad, hotels could give behind the scenes tours in VR to showcase their kitchens and restaurants and the size of their pools. The possibilities are endless; you could run a VR experience to show the route walking from the hotel to the nearest cocktail bar or even an exclusive look into the point of view of one of the members of staff to demonstrate how hard they work to achieve the standards they claim.

Virtual Reality lets you plan and book your trips abroad effortlessly, with thorough visual details provided to ensure you know you have booked somewhere you’ll love. This means more time can be spent preparing for your holiday in true British style, usually with some excessive fake tanning and the purchase of more sun hats than is ever necessary for one head.